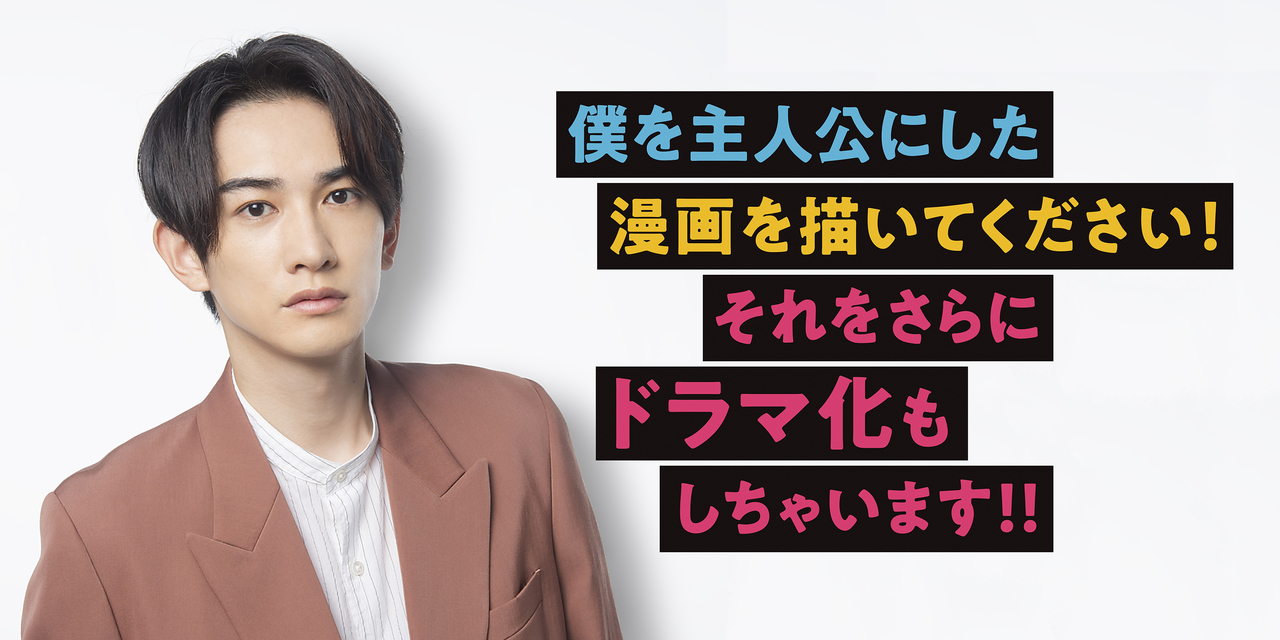 "Boku wo Shujinkou ni Shita Manga wo Egaite Kudasai! Sore wo Sarani Dramaka mo Shichaimasu!!" is a collaboration project launched by TV TOKYO and e-comics platform "Mecha Comics" to select a winning work that will be serialized and adapted into a drama.
This project held a contest among manga artists, and the Grand Prize work will be serialized on "Mecha Comic" and made into a drama on TV TOKYO.

A documentary about the selection of the winning work will be aired from 1/6/2022 (Wed.) before the broadcast of the drama!

From 6 groups to 3 groups and then to 1 group... The documentary records how a single group of manga artists was selected from a large number of applicants as well as the production process of the manga adaptation.
As the leader of the judging committee, Keita Machida participated in remote interviews and presentations with the applicants and selection meetings with the staff. Please pay attention to how he sincerely interacts with the applicants!

It is an unparalleled project in the history of TV programs where you can enjoy both a documentary and a drama.

Please look forward to the documentary which records behind the scenes of the manga and drama production that can hardly be seen at ordinary times!

A video of Keita Machida, the leader of the judging committee of this project, and the candidates who entered the final round has been unveiled on the official YouTube channel before the broadcast of the documentary and the drama!


◆Keita Machida's Comment
I always want to be deeply involved in work production. Therefore, I was extremely happy when I was asked to participate in this project.
I remember deciding to participate in this project immediately, because I could do something amazing in this risky project in which I may encounter some obstacles.
This project is so attractive, that I am being envied by my colleagues from the same industry. I think I am probably being avoided because I say "I know, right?" too much.
Anyway, I could not help but feel more and more excited since I received the invitation.
I have been greatly influenced by manga since I was a child, so I am really happy that I can become a protagonist of a manga as well as a drama adapted from this manga.
I am amazed at the wonderful original works submitted by the applicants.
Also, I am impressed by the power of creating a work from scratch and their will of creating something.
Again, I want to express my gratitude to all applicants. Thank you very much.
As one of the judges, I also feel the determination and responsibility. I am learning things that are important for my future activities by thinking about how to maximize the possibilities without just observing from above and watching in amazement how the staff interact and personally provide close support.
After repeated discussions, we reached an agreement and selected the manga that will be adapted into a drama. I will keep it well and make it a unique and interesting drama.
The filming will start soon. I will try my best to get fully prepared while receiving help from the staff members.
I hope I can broaden my horizon during the filming so that I could have many new "ideas".
Everyone, please look forward to our challenge and enjoy this work.